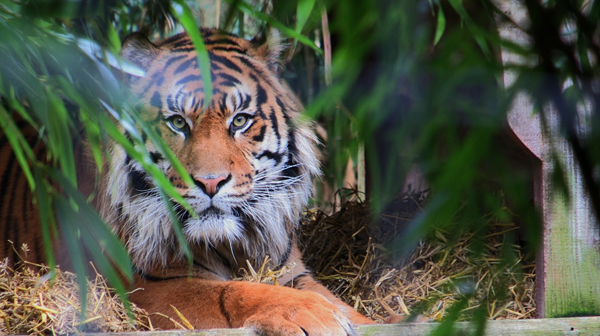 ‘Back for a three-part third series, this is a hugely enjoyable, soapy mixture of unpredictable animals and obsessively dedicated staff.’

‘…the photography was consistently excellent and if you like your animals close up and cute, then you may be back for more.’

Cameras return to the Zoological Society of London (ZSL) for the critically acclaimed series The Zoo. The films explore the changing role of zoos in the 21st century as keepers struggle to breed critically endangered animals. They examine the extraordinary relationships between keepers and their animals at one of the oldest and most famous zoos in the world.

Tiger Territory, London Zoo’s £4 million newest centerpiece is being readied for its two stars; critically endangered Sumatran tigers Jae Jae and Melati. Both have newly arrived from zoos in Australia and the USA. Meanwhile, 2 human cardiologists operate for the first time on chimps to try to establish why so many chimps die of heart disease.

We follow passionate vets treating Bertha, a Burmese python ailing with a respiratory infection, anesthetising and X-raying a limping Humboldt penguin and carrying out an ultrasound on a pregnant Galapagos giant tortoise. The keeper at Butterfly Paradise wrestles with a white fly invasion and in the zoo’s rainforest keepers are working out how to keep all the Tamarin monkeys from stealing the sloth’s food. Tiger Territory gets a grand Royal opening by the Duke of Edinburgh and, much to the relief of keepers, the two tigers start mating for the first time, which may well lead to the first tiger cubs at the zoo for 15 years…