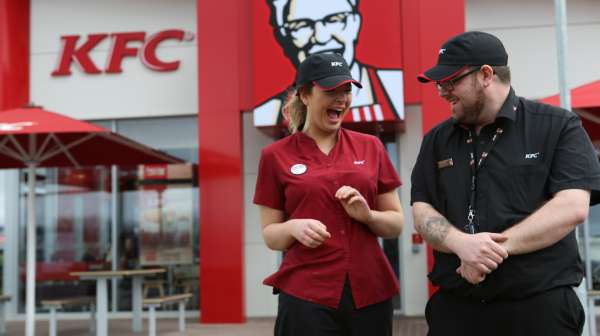 ‘This entertaining three-part series goes behind the counter of Kentucky Fried Chicken, the huge and lucrative industry from the USA’s Deep South that’s taking over the UK with 35 new branches every year.’

‘Some people will see this as a puff piece for a fast-food chain. Others will see it as a searing portrait of capitalism at full tilt. The odd thing is, it’s quite cleverly both at once.’

‘This revealing documentary lifts the lid on the fried chicken chain, taking in everyone from management to suppliers to shop floor staff, and, while the usual stitch-up is anticipated, what evolves is a picture of an employer who cares deeply about its staff and a place where standards are paramount.’

Valued at over £4 billion a year, the fast food industry is big business and even bigger controversy… With its globally recognised but fiercely protected recipe for fried chicken, KFC is one of the brands that has divided public opinion. Love it or hate it, the fact is very little is known about what goes on behind the scenes. Now for the first time KFC exclusively throws open its doors in a tell-all documentary series.

This rich character-driven, fast-moving series takes viewers into the heart of the company and into the hearts of its loyal and disloyal customers and reveals why we have become addicted to fried chicken and chips…

The Billion Dollar Chicken Shop beds-in with the KFC brand; from the boardroom to the kitchen and reveals the truth about the company that we all think we know…