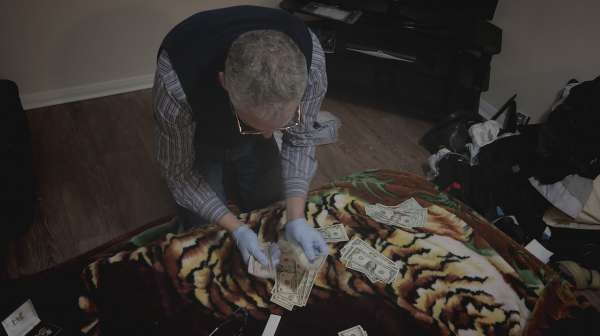 ‘In the first of a new run of this excellent fly-on-the-wall series, we follow City of London police officers as they track and raid the gang, who have made millions by selling, over and over again, pockets of worthless land on flood zones. We are taken, too, into the multimillion-pound homes of the fraud’s kingpins, their wardrobes packed with designer goodies.’

‘This invaluable series highlights some of the nastiest scams, starting tonight with land bank fraud. Companies are set up for short periods of time in prestigious offices to sell parcels of worthless land using high-pressure telesales agents.’

‘Documentaries like this should be required viewing. Watch one every time you’re about to do anything with your hard-earned savings and ask yourself: ‘Am I being had?”

Fraud Squad reveals how organised crime groups are carrying out ingenious new frauds to steal millions from our bank accounts.

With exclusive access to the City of London Police Fraud Squad trails detectives as they pursue a gang who have committed the biggest ever cheque fraud in Britain,  counterfeiting thousands of bank cheques stolen from people, small businesses and charities across Britain.

The 1st film in the series reveals how organised crime has relocated into Britain’s property market selling worthless land they claim is ripe for housing development.  Detectives investigate one gang who conned hundreds of British victims, having made £10 million.

Produced and Directed by: Matt Haan & Will West