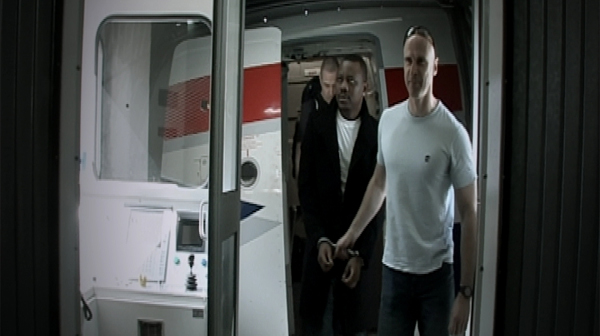 ‘A shocking, but compelling two part investigation into one of Britain’s biggest share frauds.’

‘This two part documentary plays out almost like a thriller as it follows City of London police’s economic crime unit in pursuit of a gang of ruthless scammers.’

‘This two-parter sounds like it might belong to the ‘Motorway Cops’ school of dull, bathetic plod-TV. But it’s a much more involving beast than that, co-opting the dynamics of a passable if generic thriller as scam artists responsible for frauds involving the sale of fake shares in non-existent companies are located, tracked and taken down.’

Fraud is the new goldmine for organised crime. 3.2 million people in Britain have become victims. One of the most lucrative scams is ‘Boiler Room’ fraud. People are conned into buying worthless shares in fictitious companies. Some victims have lost their homes, others have committed suicide.

Fraud Squad shadows detectives as they investigate one of the biggest share frauds in Britain. The hunt for the Nigerian ringleader and his gang takes detectives across the playgrounds of Europe. Will they recover the £20 million stolen from the victims before the gang spend it on their lavish lifestyles?

This critically acclaimed series exposes this subversive and devastating crime for the very first time with fast-paced action and compelling stories.